Most In-Demand Tech Jobs and Skills

A new analysis of data from Burning  Glass, which collects millions of job postings, confirms what you might have suspected: demand for software developers/engineers far exceeds that of other tech-related roles.

That’s no surprise, of course: now more than ever, companies need technologists who can build, launch, and maintain all kinds of apps across all kinds of platforms—from tiny IoT devices all the way up to massive IT infrastructure setups. Just check out the following chart of tech jobs with the most postings over the past 30 days, which correlates very strongly with demand:

However, “software developer/engineer” is an extremely nebulous term, especially given how many companies want a very high degree of specialization. It’s not just about the title—it’s about the skills. What do employers want these developers/engineers (and architects, and administrators, and programmers…) to do? Fortunately, Burning Glass can also provide us with the most-requested tech skills over the past 30 days: 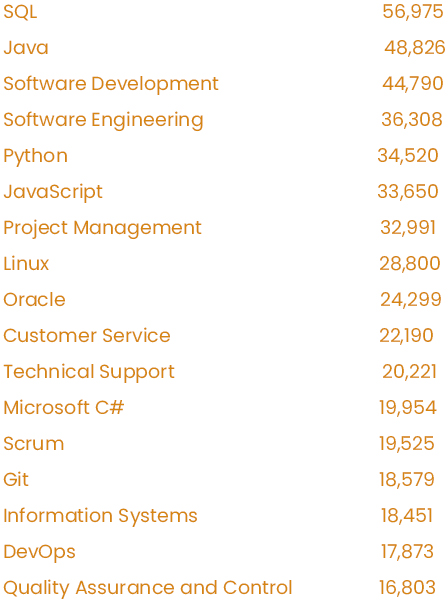 It’s worth highlighting Java for a moment here. Although some other programming languages (most notably Python) have been drawing a lot of buzz lately, Java is still going strong some 25 years after its creation. An entire ecosystem has sprung up around the language, including tools such as Microsoft .NET, and that’s probably a key reason why it ranks so highly on Burning Glass’s skills chart: Once a company has used Java to piece together its whole technology stack, it needs to keep relying on it for the foreseeable future.

Other programming languages on this list—Python, JavaScript—suggest that employers are much more interested in widely used, tried-and-true languages instead of up-and-comers such as Kotlin and Swift. That makes sense: Many companies have tons of legacy code, and also they want to use languages that a lot of potential employees are familiar with.

If you’re in the market for a new position, keep in mind that a very solid grasp of some of tech’s most fundamental languages and skills is often exactly what employers want.